The Zaanse Schans is a unique part of the Netherlands, it’s a collection of old windmills, shops, businesses and houses that have been relocated here. The windmills are an essential part the Dutch landscape and in Zaanse Schans you can find many. Zaanse Schans is like an open-air museum where you will get free entrance into the area. This is one of the most popular day trips from Amsterdam.

The conservation project in Zaanse Schans started in 1960 to preserve the buildings and crafts of the country’s industrial revolution in the eighteenth and nineteenth centuries and many of the historic buildings and windmills were moved here for preservation. Now Zaanse Schans is having a collection of traditional Dutch houses, windmills, workshops and museums which offers insight into Dutch social, cultural and industrial history.

Things to do at Zaanse Schans

As a part of preservation project there are lot of museums in Zaanse Schans. The biggest museum is Zaans museum.

After you arrive to the Zaanse Schans, the first thing visible is Zaans Museum. The Zaans Museum gives a historical overview of the Zaans region’s culture, history, people, trade and industry of the area. It has a varied collection of paintings, costumes, furniture as well as multimedia exhibitions.

The museum also houses the Verkade Pavilion which shows the visitors how the Verkade company created their biscuits and chocolate. The museum is Open everyday from 9:00 to 17:00 Hrs.

There are a few other museums at Zaanse Schans:

This museum has a collection of different Dutch timepieces and the clocks that chime together every hour there.

This old fisherman’s cottage, relocated from the village of Jisp, offers a fascinating insight into the life of fishermen in the Zaan region. The cramped interior, including a traditional box bed, bed, clogs and their traditional local costumes which you can dress up and take pictures. Their life style was simple and interesting, how clogs travel from one family member to another and how some members sleep on the bed while others below the same bed.

Honig Breethuis is a wealthy merchant family house from the 1830’s.

This original bakery is still in use today since 1658. Here you can sample the Duivekater, a famous Zaanse sweet bread. Entrance is free.

History of windmill in Netherlands and industrial windmills in the area.

After entrance in the area, the left side building is a clog workshop. Clogs are a type of footwear made in part or completely from wood. Locally they are called klompen and they are an important part of Dutch heritage.

The clog workshop set up in an eighteenth-century warehouse is a popular attraction. Here you can see the clog making process along with one of the most extensive clog collections in the country. The clog making nowadays is done by semi-automatic machine and takes less than 10 minutes. The clog making workshop runs continuously throughout the day. The staff start clog making whenever there is sufficient crowd. If there are fewer people you have to wait. There are two giants clogs outside where you can take pictures with or inside the clogs.

Cheese Farm Catharina Hoeve is a wonderful replica of a cheese farm. The staff at the cheese farm, dressed in their traditional costumes, demonstrate the cheese production along with cheese sampling.

Stroll down the Village

In the green wooden houses of the village there are people living and they are not for visiting. There is however a variety of craft shops and other businesses that are accessible to visitors and require a small fee to enter.

We went inside the De Zoeker oil mill that has been around since 1672. It was relocated to Zaanse Schans in 1968. It was interesting to see the machinery and the mill from inside. There was no wind, so mill was not working. In the connected room they were selling peanut oil extracted from here along with some handcraft items.

There are not many options for vegetarian food or vegetarian meal. For snacks, veg sandwiches, pastries, Stroopwafel or vegetable pizza you can and go to The Bakery Museum or Restaurant De Kraai.

One of the things we like about this place was, many shops not only selling you their stuff, but also demonstrating how they made their stuff. We enjoyed the cheese making & wooden clog making demonstrations. We bought many pair of clogs from here.

Zaanse Schans is a bit touristy and over commercialized. Due to its proximity with Amsterdam and easy access all the tour companies and tourist come here. The entire town was very picturesque, but this place is a tourist trap.

How to get to Zaanse Schans

From Zaanse Schans our next destination was Volendam. On the way to Volendam there is a small town Edam. This town is best known for its Edam cheese which is a semi hard cheese with a yellow interior but is coated with a red paraffin wax on the outside.

From the middle ages Edam was known to be the biggest cheese market. Farmers from nearby places bring their cheese to be weighed, sold and exported all over the world. But in 1922, the cheese market was closed when cheeses began being made in factories. The “Cheese weighing house” which was granted the right to hold the market from 1520, now function as a museum.

Edam has restored the farmer’s cheese market at the same place which take place on every Wednesday from 10:30 AM to 12:30 PM during the summer.

When we went it was not cheese market day and very few peoples visible in the streets. We check the “Cheese weighing house” from the outside and left for Volendam.

Volendam is a fishing village on the Markermeer Lake. It’s known for its colorful wooden houses and the old fishing boats in its harbor, which is lined with seafood vendors.

Other than the harbor area you can also go for a stroll on De Dijk, the area which is in front of the sea (it’s lake now) with all the colorful wooden houses. This is a lively shopping and residential Street. Take your snacks from the restaurants and sit on the benches in front of the sea. During summer the Volendam harbor area and this street both are very crowded.

If you want your portrait in local costume, there are many photographer shop in Volendam. At the Harbor area there is a shoe factory and Cheese factory giving demonstration just like Zaanse Schans.

From Volendam our plan was to go to Marken. The best way to visit the village of Marken from Volendam is by ferry as it gives you a chance to enjoy the panoramic views of the villages. The trip is half an hour one way, and you can enjoy some drinks and snacks while on ferry. The upper deck is open, while the lower deck is half covered with outside seating area.

Alternatively, you can also go from Volendam to Marken by bus no 316.

How to get to Volendam

Marken is a former island and fishing village in the Markermeer. Marken was separated from the mainland by a storm in the thirteenth century. This was followed by centuries of isolation for its population. In 1957 a dike was built and Marken was connected with the mainland.

If you visit Marken, you cannot miss the little green wooden houses. People built their houses on “werven”, artificial knolls, until the seventeenth century. It helped to avoid wet feet. Though most of the houses are green, few are blue and black.

After visiting through the narrow alleys of Marken town and watching all the beautiful wooden colorful houses we returned to Amsterdam.

How to get to Marken

A While returning from Marken, follow this in reverse order.

To make the most of your day exploring, take advantage of the Amsterdam & Region Travel Ticket, which offers unlimited travel on buses, trams, trains and metros in the Amsterdam Area for 24 hours for just €19.50.

If you want to see all the above villages in one day, then there is an option of a Hop-on-hop-off bus to Zaanse Schans, Edam & Volendam for € 28, valid for one day 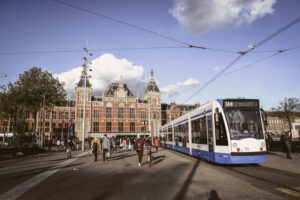 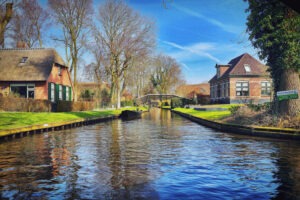 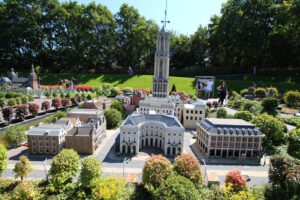 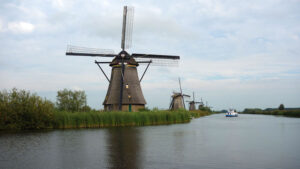 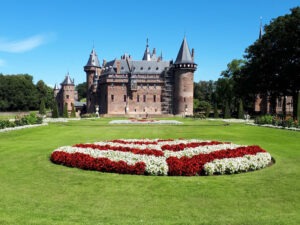 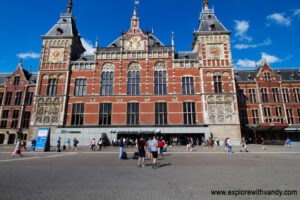 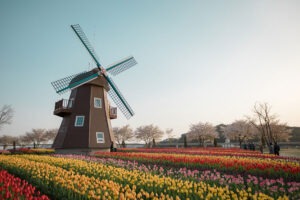